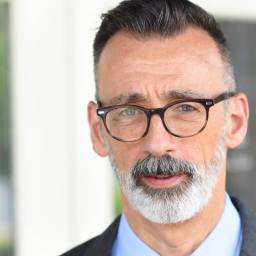 Mark is an MFA graduate of the Shakespeare Theatre Co.’s Academy for Classical Acting at The George Washington University and of Belmont University’s BFA Theater Performance program as well as the National Shakespeare Conservatory, Columbia University’s SITI Company Summer Residency, and the British/American Drama Academy at Oxford University.

With a career spanning over 45 years, he is an accomplished actor, writer, director, and producer, working in film and television as well as Off Broadway, regional, and children’s theater. Mark’s on camera credits range from the award-winning MLK biopic Selma and the Nicholas Sparks’ adaptation of The Longest Ride to a recurring role on AMC’s critically acclaimed series TURN: Washington’s Spies.

An educator of merit, Mark has distinguished himself around the country, serving on the faculties of the Brooklyn School for Digital Arts and Cinema Technology, Belmont University, the Nashville Film Institute, as the Director of Education for Atlanta’s Theatrical Outfit and Nashville’s Green Room Projects, as a leading teaching artist for the Alliance Theatre, Georgia Shakespeare, and the Tennessee Performing Arts Center, and as a guest lecturer at Vanderbilt University’s Film Department.

Mark has substantial expertise preparing students of all ages for professional experience.

He is currently adjunct faculty at Belmont University and Emory University.

< Previous Next >
+ Add your own event Eventbrite